27 Cochrane Street in Glasgow’s Merchant city is now a bar, but in the 19th century this building was the John Street United Presbyterian church, and it was in this building that the famous African-Amercian abolisionist, Frederick Douglass, delivered his last talk on Scottish soil in the 14th of Feburary 1860.

Who was Frederick Douglass?

Frederick Douglass was born Frederick Bailey in 1818 as an enslaved person in the US state of Maryland. His mother was an enslaved African-American, and his father – who’s identity he didn’t know – was probably a white slave owner. As a boy he was put to work on a large plantation growing tobacco and other crops.

Douglass didn’t know the true date of his birthday, so he choose the 14th of February. (which means he spoke at John Street on his 42nd birthday.) He learned to read as a boy, initially while by as a ‘house-boy’ and then by borrowing the books of local school children. Around the age of 20, he escaped to Pennsylvania, which was a abolitionist state, disguised as a sailor with false papers.

Douglass was an author, philosopher, and above all a great orator. He overturned the preconceptions of some of those in his audiences who hadn’t seen someone of the colour lecture in this way before. In his later life he held several senior US presidential appointments and in 1891 become the US consul general to Haiti. To quote Douglass’ wikipeia entry:

“Douglass was a firm believer in the equality of all peoples…. He was also a believer in dialogue and in making alliances across racial and ideological divides…” 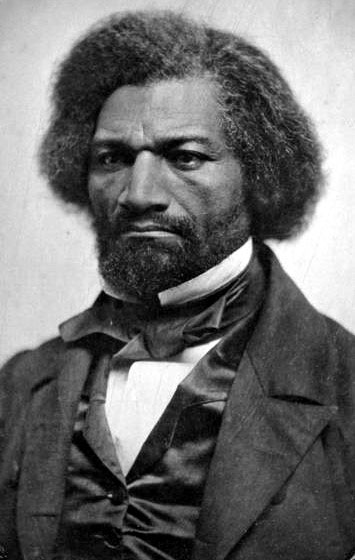 Why did he come to Scotland?

In 1845, Douglass published his first memoir “Narrative of the Life of Frederick Douglass, an American Slave”, however there was a concern that the associated publicity would lead his former slave owners to try to reclaim him. On the advice of friends, Douglass travelled to Britian to lecture. In 1846 he spent a lot of time travelling and lecturing in Scotland, in Glasgow most of his talks took place in the City Halls (see here for more details). When Douglass returned to the US in 1847, British supporters had raised enough funds to buy his freedom.

In 1859, in the build up to the Amercian Civil War, Douglass had meet with John Brown (who would later be made famous in the song ‘John Brown’s body’), refusing to help Brown in the Harper’s Ferry raid. (The Harper’s ferry raid was Brown’s attempt to capture an government amoury, but it failed and greatly increased the fear in the southern states of an armed insurrection by enslaved people and their supporters ). Brown was arrested, tried and executed for treason. Douglass, concerned that he would be considered guilty by association, fled to Canada, and returned to Britian in 1859. Douglass returned to America after the death of his daughter in Spring 1860. It was during this tour that he spoke at John Street Presbyterian Church.

Douglass briefly returned to Britian after the American Civil War in 1886.

Scotland hosted many other African-American abolitionist speakers (nearly 500 lectures in the mid-late 19th century). These lectures took place in both the big cities and small villages. More details on those speakers and the locations of their talks can can be found here.

Douglass’ visits to Britian and Scotland are well documented. Douglass was a prolific writer, and kept notes of his activities, as was famous enough for his lectures to be well documented in local newspapers. This has helped historical researchers and further details can be found on the websites and resources below.

Radio 4: In Our Time: Frederick Douglass

In one of my previous Glasgow Tobacco posts, I commented on my uncertainty about how to link the tour to slavery, but Frederick Douglass’ story has unlocked that key for me. He was raised, enslaved, on a tobacco plantation, and so his life gives insights into what was involved in the plantation economy, but escaped and spoke in a building that still exists in the Merchant City.

One of my regular interlocutors challenged me to justify why it was so difficult to link tobacco and slavery (especially considering that I’d written a 6500 word post linking to two!) As I said in that post (after about 6000 words) the voices of the enslaved are silent. In the Glasgow Tobacco tour I talk about the enslaved young man in the Glassford family portrait, but the story is the ‘painting’ not the young man – we don’t even know his name. Not so with Frederick Douglass: as you can see from above, his story is well known.

It should noted that most of the information in this blog posts comes from online material written by historians, or historical groups. None of this information (as I have accessed it) comes from published sources.

Most popular posts over the last few days